West Ham x Iron Maiden 2019 Special Kit for Dream League Soccer 2019, and the package includes complete with home kits, away and third. All Goalkeeper kits are also included. This kits also can use in First Touch Soccer 2015 (FTS15).

West Ham United of the English Premier League has allied with the legendary heavy metal band Iron Maiden to launch a special shirt which, among its designers, had nothing more and nothing less than the bassist and founder of the band Steve Harris who is also a recognized fan of the Irons .

With the name of Die With Your Boots On (in reference to a song by the British band), this shirt takes the traditional embroidered and light blue with the first as the main color as usual while the light blue is located as usual in the sleeves ; now with the novelty that it also appears in a horizontal strip on the front and the old club shield used when they were still playing in Boleyn Ground.

Among its more specific details, it stands out that in the horizontal strip you can see the name of Iron Maiden in the typography that they always use in the branding of the band, which is present in the IMFC acronym in the chest and in the number 11 from the back, which corresponds to a number that was explained precisely as chosen by Steve Harris. It also highlights an adaptation of the current shield present on the back and in the numbers that combines the traditional symbol of the hammer with a bass. 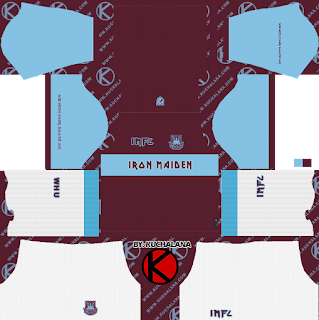